Hydra is one of the Saronic Islands of Greece, located in the Aegean Sea between the Saronic Gulf and the Argolic Gulf. It is separated from the Peloponnese by the narrow Hydra Gulf. Hydra is also a municipality and one of the few provinces in Greece to have two municipalities - which includes the island of Dokos (pop. 43) - yet fewer than five communes. In ancient times, the island was known as Hydrea, which was a reference to the springs on the island. 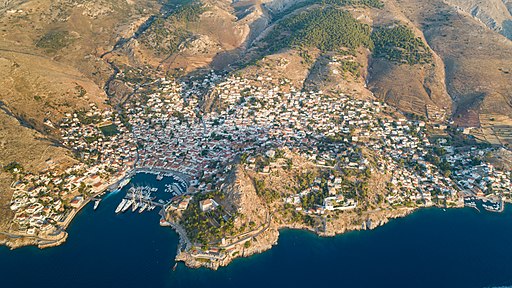 An island dependent upon tourism, well-to-do Athenians comprise a sizeable segment of Hydra's visitors. Ferries arrive regularly from Piraeus (the port city adjacent to Athens), as well as from the port in Nafplion, which is on the nearby Peloponnese coast. Besides garbage trucks, motor vehicles are not permitted on the island; which leaves the bulk of public transportation up to donkeys and water taxis. The inhabited area, however, is so compact that most people walk everywhere.

There is one main town, known simply as "Hydra port" (pop. 2,526 in 2001). It consists of a crescent-shaped harbor, around which is centered a strand of commercial establishments (restaurants, shops, markets, and galleries), all of which cater to tourists and locals (Hydriots). Steep stone streets lead up and outwards from the harbor area. Most of the local residences, as well as the hostelries on the island are located on these streets. Other small villages or hamlets on the island include Mandraki (pop. 33), Kamini, Vlychos (28), Palomitha (18), Episkopi (23), and Molos (2).

Although the island takes its name from ancient springs, it is now dry. While Hydra previously had wells, these were closed by seismic activity around the mid-20th century. Today, the island's water is imported by boat from the Greek mainland. The dominant geographic feature of Hydra is its rocky hillsides, which are empty save for the occasional farmhouse and one or two very isolated Orthodox monasteries.

Hydra is deservedly one of the most popular day-trip destinations from Athens. The port of Hydra has a scenic location in a deep harbour, with whitewashed houses rising on the hills on both sides from an azure blue sea. An enlightened policy of development has meant that there are absolutely zero high-rise houses or cars, and while the main port boulevard is packed full of tourists in season, only a few minutes away are quiet back alleys with a soul.

Incidentally, the name has nothing to do with the nine-headed monster of Greek legend; instead, it's an abbreviation of Hydrea, or "spring". The spring has long since run dry, but the name remains.

All ferries dock at the center of the north side of the island at the eponymous port of Hydra. Practically everything of touristic interest is packed along the main road that follows the coast or within a block or two of it. If you head west for about a kilometer, past a little headland, you'll reach the neighboring, far less touristy village of Kamini.

There are frequent sailings from Piraeus to Hydra. You can opt for either a slow car ferry (around 3 hours) or a fast catamaran (1.5 hours). As of 2007, the cheapest fast option is Euroseas, which has one daily departure at 9:30 AM (return at 6 PM) and sells return tickets for €34. Hellenic Seaways has more frequent sailings (up to half a dozen daily), but also charges more at around €42.

Get around on Hydra

Motorized transportation is forbidden on Hydra. Getting around the town center on foot is easy enough, but for going elsewhere the only options are by donkey or boat taxi, both of which congregate at the center of the port. For the boat taxis, there's a sign (in Greek only) listing fixed fares for popular destinations, ranging from €9 for the short hop to Kamini to €120 for a circuit around the whole island.

What to see on Hydra:

Cathedral of Hydra (center of town). Tue-Sat 10 AM-5 PM. Spot the belltower, with a small "Ecclesiastical Museum of Hydra" sign pointing the way inside. Opening hours for the interior and the museum are rather more erratic than stated, but the courtyard is always open and worth a peep. The cathedral's interior is gorgeous, with hundreds of gold and silver icons and other elaborate Orthodox decoration. There's also a small museum on the second floor, which displays a variety of historical religious objects, textiles, bejeweled vestments, and other treasures. Entry to the museum costs about 4 euros.

Hydra Museum (next to ferry dock). Small but reasonably well-presented museum on the seafaring ways of the Hydriots and their disproportionate contributions to Greece's many wars. Notable exhibits include the embalmed heart of Admiral Andreas Miaoulis and the sad story of patriot Kouroulis Michalis who, we are informed, "died of sorrow caused by the renewed enslavement of his homeland" in 1832. €4.

Things to do on Hydra:

Hydra doesn't have much in the way of sandy beaches, but there are plenty of smooth rocks and pebbly bays for sunbathers. The water is clear and local daredevils show off by diving off the cliff on the road to Kamini — don't try this unless you know what you're doing!

Hydra has a bit of a reputation as an artist's haven, and there are plenty of galleries around.

Where to eat on Hydra:

The main road of Hydra is packed full of restaurants. Most prominently feature seafood, but little asterisks in the menu note that pretty much all of it is actually imported frozen from far away. Only a few restaurants offer local fish, and they charge accordingly.

For a more local experience, head down to Kamini, which has a few distinctly unhip tavernas with some of the best food on the island. Since you probably stay at our Villa anyhow, this is the place to dine out.