Ferryboats connect the island with Volos and Agios Konstantinos (4hrs.and 30min). During the summer it has also connections with Thessaloniki and Kymi.At this moment two ferry companies are coming to Alonissos, GA Ferries & Hellas Ferries.

Hydrofoils connect the island with Volos and Agios Konstantinos(2hrs and 30min).These connections link also Alonissos to nearby Skopelos, Skiathos, Skyros, Evia, and to the Peninsula of Halkidiki.

A Glance at the History of Alonissos

Tradition holds that the Cretans,with the mythical hero Staphylos as their leader, established colonies on Peparithos and on Ikos, in the 16th century B.C.during the Minoan domination of the Aegean Sea.

The Minoan colony later acquired a Mycenean character. The Mycenean city stood on the site today known as Kokkinokastro, on the easter side of the island. However, it is historically ascertained that the Geometric period finds Ikos under the domination of the Dolopes.In time the Dolopes turned in to dangerous pirates and became the scourge of the Aegean. The Athenian navy later on set out to confront them, under the leadership of Cimon, who routed them and annexed all the islands to Athens. Thus, in 476 B.C. the island joins the first Athenian Alliance.

During the classical period Ikos must have contained two cities. one of them was probably located at Kokkinokastro, where ruins of the wall remain till today and the other one on the site where the Village of Horio or Old Alonissos stands today. During this period the island was renowned for its vineyards and its exceptional wine.

In 190 B.C. the island was taken by the Roman navy. After this point there is no further information on the history of Ikos until the occupation of Constantinople by the Franks in 1204 A.D.when both Constantinople and the other neighbouring islands pass in to the hands of the Venetian.

Togethet with Skopelos, Alonissos is occupied by successive conquerors. After the fall of Constantinople to the Turks, in 1453, the islands are turned over to the Venetians. They remained Venetian until 1538, when the Turkish navy, under the leadership of Khair-ed-Din Barbarossa, imposed Turkish authority.

During the Greek revolution of 1821 and the first years of independence of Greek Nation, Greeks from different parts of Greece took refuge on Alonissos. These people, along with the natives of the island compose the present population of Alonissos.

The island at its widest is 4.5 km from northwest to southeast and at its longest is 20 km from southwest to northeast. The island is mostly limestone. It is located east of mainland Greece and Magnesia, northeast of Evia and northwest of the island of Skyros. Alonissos has one main road which leads to three villages in the western part of the island and several unused roads throughout the island.

The Marine Park of Alonissos

The National Marine Park of Alonnisos Northern Sporades was the first designated Marine Park in the country and is currently the largest marine protected area in Europe (approximately 2.260 Km2 ). Besides the sea area, the Park includes Alonnisos, six smaller islands (Peristera, Kyra Panagia, Gioura, Psathura, Piperi and Skantzoura), as well as 22 uninhabited islets and rocky outcrops.

After a long period of population decline due to emigration, the population has shown stabilisation in recent decades with a small steady increase, now reaching 3.000 inhabitants during the winter period. The main occupations are fishing, raising livestock and agriculture. The tourism industry has flourished in recent years. The declaration of the area as a National Park is expected to contribute to the area’s mild and sustainable development by creating new opportunities for employment in parallel with support of traditional occupations.

The area is of scientific, educational and culture interest, as a result of discoveries of both archaeological and historical monuments on the island, dating from the prehistoric, classical and Byzantine periods (caves, shipwrecks, old monasteries and churches). In areas where approaching is permitted, visitors can partake in swimming, snorkelling, observation of the sea bed and wildlife, amateur photography and filming, visit to cultural monuments, walking etc. There are special restrictions regarding amateur fishing.

The Mediterranean monk seal Monachus monachus, was named after the sarcoid in the back of its head, assembling to the cowl of Romeo-Catholic Franciscan monks and/or because it does not like living in large groups preferring solitude and isolation from human presence. It is represented on ancient Greek coins and passages in Homer describe it basking in the sun on sandy beaches. However, nowadays the monk seal is considered as the number one endangered species of the European fauna. 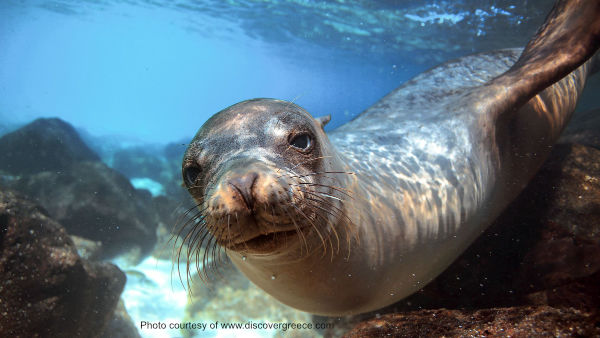 In the old times, the monk seal was widely spread along the coasts of the Mediterranean, Black Sea, and the Atlantic coast of Morocco and Mauritania. Over time and due to the various pressures posed on the animal and its habitat, it has become extinct in more than 10 countries during the last 20 years. To accurately assess the number of remaining individuals is very difficult, as its populations are dispersed and existing data is still limited. Generally, it is estimated that only 400-500 individuals survive today. Many scientists believe that Greece holds at least 2/3 of the total remaining monk seal population. On the North Atlantic coast of Mauritania (Cap Blanc) the monk seal population is estimated to be 100-150 animals, a population which for the last few years is under a serious threat due to a virus epidemic. Smaller populations are scattered along the coasts of Madeira, Morocco, Algeria, Tunisia, Croatia, Albania, Black Sea, Turkey and Cyprus.

The monk seal is one of the largest seal species in the world with a length of 2-3 metres and an average weight around 250 kg. The females mature when they are 3-4 years old, whereas the males a little bit later. They live up to 30-45 years.
The seal’s body is covered by short, sleek coat of fair grey, brown or black colour and a lighter colour underneath it. Newborn pups are about a metre long and weigh 15-20 kg. They have a black coat wool-like fur with a white patch on its abdomen. There are no significant differences between males and females.

Gestation lasts about 10 to 11 months and births occur mostly between May and November, with a peak in September - October. Lactation period lasts about 4 to 8 weeks. Because the gestation and lactation period is long the births usually occur every other year.

The monk seal usually gives birth to only one pup each time. Nowadays, births mainly take place in caves. This was not always the case in the past, but only since the monk seal was forced to abandon the sandy beaches due to the increased disturbance caused by human activities. Within a few weeks after their birth the pups are able to dive and swim but they can not swim well during the first days of their life. The life span of the monk seal although not scientifically proven, has been estimated to be around 35 to 40 years.
The monk seals seem to be opportunistic predators, feeding on all kind of fishes and cephalopods which abound in the area where they live. An adult seal is estimated to consume 5-10% of its body weight per day. In order to find food they attack fishing nets, follow fishing boats or follow the migration routes of fish.

The main threats to the monk seal are:

a. Increased adult and Juvenile mortality caused by deliberate killing: In the past, seals have been hunted intensively for its fat and skin. Today, it is often considered to be a natural competitor of fishermen and sometimes does indeed damage their nets to "steal" food. Fish stocks are diminishing continually due to overfishing as well as other illegal practices. This competition for the available food resources is the main reason for seals being killed from time to time in Greece, despite the barbarity of the practice, though the frequency of such deaths fortunately appears to be decreasing. It is noteworthy that in the area of the NMPANS no such incident has been reported during the past few years.

b. Increased pup mortality due to loss of suitable habitat: Monk seals in the past were giving birth to their pups on open beaches and big caves. Today, due to human activities (tourism, summer houses, ports, roads etc.), the animals have been forced to pup on beaches within caves. The pup mortality in such caves is higher than on open beaches due to the fact that inexperienced pups can be easily injured or drowned by waves during severe storms.

c. Increased adult and juvenile mortality caused by incidental entanglement in fishing gear: Incidental mortality, mainly by drowning, is a concern throughout the Mediterranean. Monk seals can become entangled in all kinds of fishing gear, but mostly in static fishing nets.

The countries first underwater museum is part of the National Marine Park of Alonissos and Northern Sporades. In the past, you would need to have a special permission to visit the area, but now recreational divers can plunge into the waters and see the underwater antiquities including a ship wreck called “Peristera”. It dates back to 425 B.C., was discovered by a local fisherman in 1985, is one of the biggest merchant vessels of the classical period (fifth through fourth centuries B.C.) and carried over 4000 amphorae, glazed bowls, cups, plates and table ware.

Whilst such large vessels were considered to be first built in Roman times, Peristera is not only older, but also one of the best preserved wrecks. The cargo has remained in place just as it was loaded, thus indicating the vessel’s shape even though very few burnt wooden parts of the hull have been recovered.

For those who are not so much into diving, but curious to get a glimpse of the wreck, there is a underwater camera streaming real-time video and a 3D virtual-reality tour of the shipwreck is also available at the Information and Awareness Centre in the hillside village of Chora.

Despite Corona Virus travel restrictions in place, the pilot phase was very successful and the official opening is scheduled for June 2021.

From patitiri,which is the center of the island,with caiques or by foot through beautiful paths, you will arrive at the most magnificent beaches,such as :

Mourtias:South and close to Patitiri,overlooked by the old town, is covered with flat stones,crystal clear water,with several tavernas on the beach.

Marpunta: A very gorgeous beach covered with sand , to the North of the island.

Rousoum:Near Patitiri, this beach is covered with stony sand.There are several traditional tavernas along the beach.

Votsi:The harbour of Votsi is very traditional and charming, with small fishing boats and romantic tavernas.

Chrisi Milia:A long and sand beach, ideal for children since there is a sandy bottom for some distance out.

Agios Dimitrios:Perhaps one of the best beaches on the island,with a spectacular view.

Yialia and Vrisitsa:Both are very beautiful, consisting of flat stones and black sand.

There are other numerous beaches that can be reached by small boats,cars, bikes or on foot.